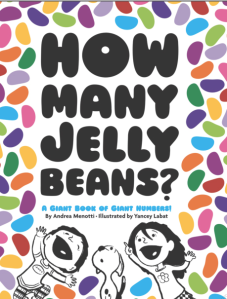 Today’s Favorite: How Many Jelly Beans? A Giant Book of Giant Numbers
by Andrea Menotti – Illustrated by Yancey Labat

This book is just so cool. The illustrations are modern and fun. The little dog is hilarious. And it’s a sneaky way to introduce little ones to the visual reality of really big numbers. The story starts with a brother and sister challenging each other to who can eat more jelly beans. Each one tries to outdo the other and the illustrations reflect their increasing challenges. 25…100…1000…100,000 jelly beans! It tries to answer the great philosophical question: Is there such a thing as too many jelly beans? (The dog doesn’t think so.) The fold-out page at the end of the book has 1 million jelly beans on it! I can’t think of any other place my 4 year old has actually seen a million of anything. It was a pretty cool realization for him to see…1 million is a lot! Totally awesome!

at shufflesteps. Hi. I write about self-awareness, parenting, birds, aging, women's health, healing, and whatever else pops into my brains. Welcome. Thank you for taking the time to read the words on these pages. And please visit my sister site: kriskadams.com

To contact me directly about services, please use this email address:
shufflestepsblog@gmail.com